Dose of the Wilderness- RX for “Urbanitis”

Ever want to turn off the city and just run? Urbanitis is a common condition in the City of Angels that causes me to dodge crowds, noise pollution, and the constant insistence of my cell phone. When these symptoms occur, I feel the need for a dose of wilderness.

In July I answered the Call of the Wild by taking a horse pack trip hosted by the McLean family at their Tyslos Park Lodge in supernatural British Columbia, Canada. A heart-thumping flight from Vancouver over the vast snow-packed expanses of the Coast Mountain Range delivered me to their door.

The feeling of being connected to nature with every cell of your body is the most magical one you ever will get. —Fellow rider from Germany, Tomke Oeltjen

The lodge, built with local timbers and perched on a knoll overlooking ocean-blue Chilko Lake, is a testimony to the tenacity of the McLean family who have called the Chilcotin home for over 60 years. The 52-mile glacier-fed Chilko Lake, the largest and deepest lake in the Chilcotin Plateau, is the centerpiece of the region. Anglers come from around the globe to test their luck in the crystalline waters. Adventurous equestrians gather here for an authentic, exciting riding experience in gorgeous country.

A fourteen-mile boat trip up Chilko River brought me and Josh, the head wrangler, to a placid lagoon which served as the basecamp for my pack trip. It was my first step off the grid and into one of the last pristine wilderness areas in North America. I woke the next morning to the haunting call of a loon floating over still waters mirroring the mountains we were soon to climb.

The smell of camp coffee and crackling bacon lured me out of a snug sleeping bag. By 9 o’clock duffels were stuffed, horses were tacked, and seven riders, four pack horses, and two guides headed out for Goat Camp. This is not just a ride, it is a journey back into a time when you could ride for days and see no one. Like a band of Indians, we rode in silence through quaking aspen to a rocky shore of the Chilko Lake to water the horses. 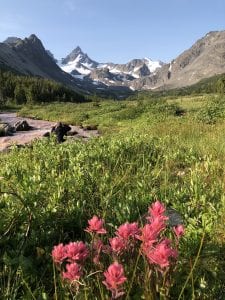 The trail to Goat Camp is infrequently used each season and feels a bit like bush-whacking. It snakes through alder thickets and then begins to climb. Our sturdy, sure-footed mounts took on the steep ascent with aplomb. Josh cautioned us to “Stand up. Get out of the saddle. Grab mane if you have to! You don’t want to sore up your horses on the climbs.”

He was gentle with the animals and displayed a kind spirit and a helping hand to guests. With our safety in mind, he checked cinches and made sure all was secure before leading us along a narrow trail along the spine of a mountain overlooking the lagoon, splashing through creeks, and clamoring up and down steep ravines.

There is something special about having the world to yourself. As we rambled on, the stress of the city fell away. I felt like a butterfly being freed of its chrysalis. The world seemed to be turning slower. I had time to take in the orange paintbrush and magenta fireweed lining the trail. I was pleased to spy a miniature columbine, my favorite wildflower. 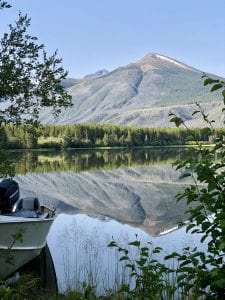 This region is a cross between arid Colorado and the soggy, temperate rain forests of coastal British Columbia. Lying in the shadow of the Coast Range, it receives less rain than the coast and experiences severe winter temps as low as 55 below. The result is snow-capped granite spires gouged by glaciers and streaked with rivulets and slopes of loose scree that only mountain goats can call home. 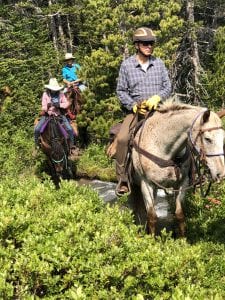 After several hours on a winding trail through old-growth forests that funneled onto a narrow track overlooking a gorge, we arrived at Goat Camp, elevation 6,800 feet.

Our mounts and the pack horses carrying hefty loads had climbed 3,000 feet that afternoon. Now the air was crisp with temps hovering around 70 degrees.

This magical setting framed in snow-streaked mountains was to be our home for the next three nights. I awoke here to the energetic voice of Pink Creek (so named as the minerals from the glacier feeding the stream turn it a salmon color). A favorite day ride was up the emerald green valley and across Pink Creek to its headwaters. Chartreuse alpine sedges and mosses lined the shore where it merged with a translucent glacier flow.

The day ride to the top of the world is nothing short of spectacular. We plunged through boughs of Jack Pine keeping a sharp eye out for trees that can catch and bruise a knee. The forest floor was a carpet of salmon berry, devil’s club, huckleberry, cinquefoil, paintbrush, and lavender asters along with many varieties of ferns and mosses.

We hopped a sparkling rill stealing through an alpine meadow and began to climb on a switch-backing trail. Once aloft at about 8,000 feet, the air became rarified. The head-spinning 360-degree view of snow-frosted peaks and the azure Chilko Lake far below made me feel as close to God as I ever would be.

Back at the lodge, a senior fly-fisherwoman said her favorite day at Tsylos was a 21-mile float down the Chilko River. During her week, she had fished the lake and the river where she caught (and released) rainbow and bull trout. In the fall the sockeye salmon run up the Chilko River via the Frazer River that meets the sea in Vancouver.

This fish migration brings over 100 grizzlies to gorge on the protein-rich fish. Photographers from around the globe come here to capture this phenomenon. Sadly, the salmon used to arrive in the millions but are now down to about 300,000 a year. The most obvious factor are fish farms on the coast that pollute the waters with viruses and parasites that attach to the spawning salmon.

Like all of our wilderness areas, this one is facing declines in animal and fish populations due to human interference in the natural order of things. The First Nation people believe there is spiritual energy in all animals and plants and they deserve respect.

In 2004, all rights to the Chilcotin region were given back to the First Nation tribes. It is my fervent hope that they will continue to preserve these forests, rivers, and mountains they hold to be sacred.

On my ride, I felt connected to Earth Mother and Sky Father, the laughing streams and rills, and the multitudes of wildflowers lifting cheery faces to the sun. I am grateful that the Chilcotin/Cariboo region remains an untamed wilderness where the best way to see it is from the back of a good horse.

A special thanks to the McLean family for persevering where others have failed to provide a way for city folk to air out their spirits on a crystalline Chilko day. And to fellow wilderness traveler Marion Buse, whose photos grace this story.

Linda Ballou is the author of The Cowgirl Jumped Over the Moon. You will find numerous travel articles on her site www.LindaBallouAuthor.com