In March, The Virgin Group honored storytelling month on its website because Richard Branson believes that the strength and ability to tell stories effectively drives performance in business.

Branson is just one business leader who has tapped into the ancient craft of storytelling to drive performance and mold the behaviors that construct the culture within many of his booming companies.

Another one of these astonishing storytellers is our guest today, Doug Keeley. Doug, the founder of The Mark of a Leader, believes that his life and career path were ultimately changed by the narrative of Tim Burton‘s film, Big Fish, after he lost everything in the crash of his $50 million company.

Doug will share with us how he learned to drive performance through compelling storytelling and how narrative can help you construct the level of prosperity you deserve in your company.  He originates from Toronto, Canada, where he formed his storyteller skills by being an elite jazz guitarist, a brand marketing guru, and an acclaimed speaker and storytelling coach to many leaders.

In This Show, You’ll Learn:

“All great organizations have a story about how they started and stories that show their culture. I put that together with leadership, and that’s how I ended up here.” – Doug Keeley

“One day, we were this crazy, great company and the next day it was gone. That was a very scary moment.” – Doug Keeley

“Kids aren’t learning by the written word – they are learning by video. At some point in the not too distant future, you’re going to drop in virtual reality to that, and it’s going to completely change how we tell stories.” –Park Howell

“We take this corporate drivel, self-aggrandizing features, and benefits and turn them into stories. If we’re good at it, we make people think, and that’s all Hollywood does—that’s what great writers do.” – Doug Keeley

“In religion, the story will tell you ‘this is how we want you to behave in this circumstance.’ When you put a whole bunch of behaviors together, that’s called culture because the dominant behaviors of any group are what their culture is all about and inarguably in the world of corporate culture, culture drives performance.” – Doug Keeley 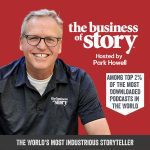 Daniel Nestle, Leader, Communications and Corporate Responsibility, LIXIL America, shares how he uses the And, But, Therefore agile narrative framework to focus all of his business communications...

September 19, 2022
#377: How Music Composers Use Story Structure to Captivate Listeners

Darius Holbert, an internationally acclaimed composer and creator of the soundtrack for Oh, The Places You’ll Go at Burning Man viral film, shares how composers use story structure to captivate...