Beyond Broccoli: Creating a Biologically Balanced Diet When a Vegetarian Diet Doesn’t Work

Beyond Broccoli: Creating a Biologically Balanced Diet When a Vegetarian Diet Doesn’t Work 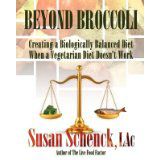 As you read this book it becomes quite evident that author Schenck, a licensed acupuncturist hasspent quite a bit of time researching her topic, using personal experiences and her own body to test various dietary strategies.

A health seeker since age 16, she had strictly followed a raw vegan diet for six years, writing about this in an earlier book, The Live Food Factor. Initially she felt great on this program, but she began to notice a progressive deterioration of her health, as well as the health of friends who followed this diet.

Specifically, she noted deficiencies in vitamins B12, D and K2. This resulted in memory problems, muscle tissue loss and irritability, as well as hair loss. She also had high triglycerides and high LDL, causing concerns over hearth health. And without getting enough B and K vitamins, she was also headed for osteoporosis. In addition, she was personally challenged by bloating after meals. She says the bloating was significant: it often made her look five months pregnant.

Resisting the considerable pressures of fellow vegans, she used scientific method – essentially the same technique used when we attempt to identify food allergies — and began adding animal foods back into her diet.

The result: her health improved to a level significantly higher than it had ever been in the past. After exhaustive research, she came to the conclusion that the cause of her health problems was a lack of vital nutrients, found only in animal products.

Specifically, she arrived at the conclusion that our bodies thrive best on the diet that they evolved eating–what is called by some the “paleolithic diet.” Our pre-agricultural ancestors ate meat whenever they could get it, as well as an abundance of vegetables, nuts, seeds and some fruit. They did not have access to the grains that form the base of the nutritional pyramid that our government now advocates. She discusses at length how health deteriorated after the agricultural revolution when grains became staple foods.

This book is an important read for anyone who is on a vegan or vegetarian diet, or might be considering one. It is absolutely full of information with such interesting chapters as: