Yesterday I got my second shingles shot. And today I don’t feel very good.

The same thing happened after my first shot, back in May. I didn’t get a cough or a sore throat; didn’t have a headache. Well, maybe today I have a little headache. I also have a low-grade temperature. But mostly I just feel tired. I slept in this morning until 8:30, got up for a while, thought I was okay, then found myself flopping onto the couch and napping from 9:45 to 10:30. Now I’m awake again. Had a bite to eat. Feeling a bit better.

Last May. the symptoms lasted throughout the day. Then the next day, I was fine.

For those of you who don’t know, the shingles vaccine is yet another shot, recommended for people over age 50. I got the original shingles shot back in 2015. That was the old vaccine called Zostavax, which was used in the early 2000s, up until 2020. It required just one dose.

The new shingles vaccine, called Shingrix, requires two doses, given a few months apart. Presumably it is more effective; plus, the preventative effects of that original vaccine do wear off over time. So we should get the two Shingrix shots even if we’ve previously gotten the Zostavax vaccine. 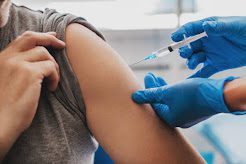 I don’t know if any of you have gotten shingles. But it’s a nasty disease that comes from reactivated chicken pox.

My dad got it the last year of his life in 2001-2002. He suffered a painful red rash up and down his abdomen, with blisters that broke open and leaked puss. He described it as a severe burning sensation. It never went away. He suffered with it until the end.

My brother-in-law has shingles now. He was going to get the vaccine, but he put it off, didn’t get around to it, and then he got shingles on his face. This was about two years ago, and it still plagues him, even affecting the vision in one eye. He’s gotten some treatments, which he says have alleviated the pain to some extent, but it still hurts enough to sometimes keep him up at night.

So the Shingrix vaccine is another shot to add to your regimen. It’s a pain, I know, getting all these jabs. But it’s better than the alternative.

This fall I already got the regular flu shot, on Oct. 24. Now I’m scheduled to get the Covid vaccine booster in a couple of weeks. I got the last one at the beginning of June. I think we’re supposed to wait six months until the next booster. But meantime, I got Covid itself at the beginning of September — and I credit the vaccine for keeping it to a mild case.

Now I’m supposed to wait two months after Covid to get the vaccine. So the timing works out. I want to get the booster before the holidays when, undoubtedly, I’ll be more at risk for exposure.

I have a friend in my golf group who’s an anti-vaccer. The Covid vaccine wasn’t thoroughly tested, he says. It doesn’t work anyway. You still get Covid. The vaccine can cause heart problems. It’s all a scam by the drug companies to make more money.

Look, I know there are no guarantees. But I took statistics in college. Perhaps more to the point, I play poker. I know a little bit about odds. I bet when the numbers are in my favor, and I’m betting on the vaccines — even if my arm does look like a pin cushion.