The Day the Parrot Died

The Day the Parrot Died 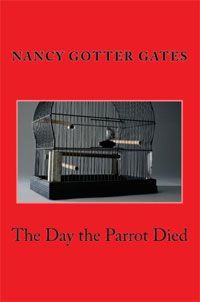 Vi used to be an executive director for the Girl Scouts. She suspects that Ty’s former career may have involved espionage, though he only admits to have worked for the State Department. The two clearly enjoy each other’s company, but don’t jump to the conclusion that they are romantically involved with each other. You would be wrong.

The story begins shortly after they encounter a fellow resident, Phyllis Duncan, in the hall holding a bloody knife. She’s clearly in shock, and they soon learn that she is likely to be charged with the murder of her husband, Ralph.

Putting these two facts together, Vi and Ty suspect there are likely dozens of people who would have wanted to see him dead. So when Phyllis is arrested for his murder, Vi asks Cliff Holcomb, a defense attorney who is also the husband of her niece, to represent her.

But is Cliff really helping Phyllis? Vi soon learns that instead of planning a defense to exonerate Phyllis, Cliff intends to plead insanity. And his case is aided by the fact that Phyllis soon attempts suicide.

Despite Cliff’s adamant request that Vi and Ty leave Phyllis’s case in his capable hands, they just can’t. Especially when they discover that if they do, it’s likely Phyllis will spend the rest of her life in a mental hospital.

Thus Vi and Ty’s secret race to exonerate Phyllis is on: In between their exercise classes, Vi’s laps in the pool, and Ty’s card-playing exploits with the “Bridge Dudes,” they launch their own unauthorized murder investigation. These sleuthing efforts often demand they travel away from Glendon Hills in Ty’s sporty red convertible. In the process they meet a parade of interesting people, and I’m sure you won’t want to miss reading the hilarious scene involving Vi and Ty in a biker bar.

Just to keep lives from getting too tedious, Vi and Ty’s subrosa efforts to interview Ralph’s former coworkers and neighbors are side-tracked by a man who enters Ty’s life, claiming to be a distant relative. This man has an urgent need of his own. And it’s one that’s rather unnerving – he claims he is dying and wants Ty to save him by donating a kidney. But is Ty even a match?

Oh, and did I forget to mention the dead parrot the book is titled after? Sorry. There is a parrot. And the parrot’s death is not only unanticipated and unnatural, but proves to be an important piece of the story.

Will Vi and Ty manage to ferret out the real killer or will Phyllis be forced to plead insanity? You’ll have to read the book to find out. But that ought not to be a problem as I can promise that you’ll enjoy this book. I wolfed it down in an evening, and wanted more.

If you’re like me, you’ll find yourself hoping Author Gates will provide us with more stories featuring Vi and Ty and their fellow residents of the Glendon Hills Retirement Center.