One for the Road

One for the Road 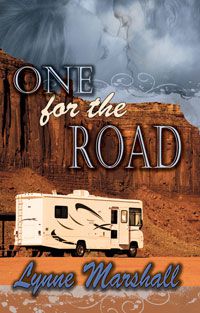 Lynne Marshall’s One For the Road is a delightful read.

As the story begins, we meet D’Anne Palmer, recently widowed and mad as heck. She and her husband Reese had led a life others dream of, travelling the US in a luxury motor coach. But all that changed when Reese died in her arms – well more specifically, in their bed, apparently a victim of a heart attack brought on by an accidentally self-administered toxic drug combination: Viagra and chest pain medication.

Prim and proper, known for always doing things right, D’Anne is horrified to discover that she is now broke and stranded outside of Nashville, in a campground along the Cumberland River. Her sons want her to sell the RV and fly home with his ashes. But she wants to hang onto the only thing she still owns – the motorhome, and needs to find a way to afford to drive it back home to California.

Enter Tyler White. Ten years ago he was on top of the world, a country singer with a number one hit: “Your High Class Love Broke My Honky Tonk Heart.” He’d packed concert halls and played the Grand Old Opry.

Now twice divorced and sorely in need of a comeback, he’s assembled a band and three weeks’ worth of second rate concerts, culminating with a gig in Las Vegas, where they’ll open for Tanya Lockwood, who owes him a favor. His big problem now: How to affordably transport his crew, their instruments and his dog.

Of course Dee – as Ty tried to call her — is way out of her element dealing with four rough and tumble, middle-aged musicians, unused to a civilizing influence while they’re on the road. She provides them with a list of “road rules,” including no drinking, swearing or sex in the RV.

And so this unlikely crew is assembled and begins to head west. The road changes D’Anne, just as much as her road rules change the men she travels with. And all would be well, if it weren’t for the fact that someone keeps breaking into the RV. Not to mention the fact that D’Anne’stwo grown up sons totally disapprove of her plans.

Come along for the trip and find out what happens. Will Dee and Ty grow to like, respect, and maybe even love each other? Will Reese’s life the insurance company ever finish their investigation and send Dee a check? Will Dee learn to enjoy country music? Will her boys stop blaming her for their father’s death? Step aboard and find out!