Europe: Chained by History: What Force Can Break the Chain?

Title: Europe: Chained by History: What Force Can Break the Chain?
(Available in both paperback and Kindle formats)
Author: Larry J. Hilton
Reviewed for the NABBW by: Anne Holmes
I didn’t enjoy learning about history until I was in high school, and took a course called Allied Arts, taught by a trio of teachers with areas of expertise in Literature, Music, History and Art. When they wove these threads (and with them, religion, politics and economics) into the fabric of their class, history suddenly began to make sense. I discovered that it’s actually a human story – not just a succession of rote-memorized dates of dictators, generals, battles, conquests and treaties.
Author, financial advisor and European history buff Larry J. Hilton also recognizes this. As he explains in his preface, he was motivated to learn more about our American civilization after the attack on the World Trade Center in 2001.  And recognizing that the roots of Western Civilization are in Europe,  he began there. But his intent with this book is to tell history as as a story of people, highlighting political, economic and social mistakes in order to suggest a better direction for the future.
Realizing that telling the history of the European world is a massive undertaking, Hilton quickly settles into telling the history of Austria.
Why Austria? First, he has personal knowledge, having spent a lot of time there, but more important he explains to readers is its location at the geographic center of Europe, it historically found itself fighting different enemies, while aligning itself with ever-changing “friends.”  And thus this book, like my high school Allied Arts teachers, carefully blends the history of religion, politics, economics — and spends a lengthy amount of time telling of the rise of Hitler and the story of the Jews.
Likely because he is a financial expert, Hilton also looks at Austria and Vienna and its chances of succeeding with a unified fiscal policy or common defense.  He discusses the development of the European Common Market, noting how, post World War II, Winston Churchill thought the only way Europe could avoid World War III was for France and Germany to join together in a United States of Europe.
In fact, he reminds readers, when Herman Chancellor Helmut Kohl and French President Francis Mitterand launched their proposal for a monetary and political union in 1990, (and with it the common currency we know as the euro) their goal was to eliminate currency risk.
Presciently, Hilton notes that their great mistake was in not recognizing that monetary union converts monetary risk into credit risk – the risk that a government might be unable to pay its creditors. Leading to financial disaster. 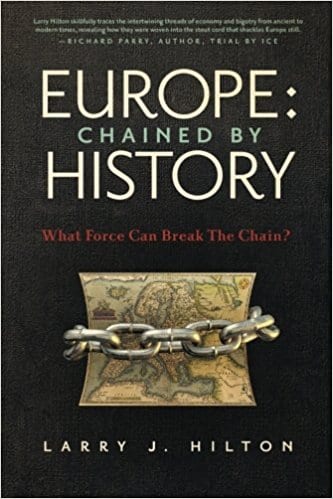 Clearly, Hilton knows his history and its implications. As I write this, roughly a year AFTER this book was originally published, the Brexit movement is not only still in play, it is Moving forward. (Brexit of course being the shorthand way of saying the UK is desirous of leaving the European Union.)
If you, like most Americans, haven’t spent too much time on either European history of European current events, let me explain that before the UK can leave the EU, it has to invoke an agreement called Article 50 of the Lisbon Treaty which gives the two sides two years to agree the terms of the split.

If you think this sounds a lot like what’s going on here in the United States, with the Trump administration, you are correct. Which is just one more reason we US citizens need to wake up and study the intertwining threads of European History. After all, we were long ago (originally by George Santayana and later Winston Churchill) admonished that those who fail to study and remember history are condemned to repeat it.

Which is why I heartily recommend Hilton’s book, Europe: Chained by History. He’s here to help us remember the past, via the wonderful stories he shares of the personal lives of soldiers, philosophers, dictators — and everyday citizens.