Home › Entertainment › Reviews › Book Reviews › When All That’s Left of Me Is Love: A Daughter’s Story of Letting Go
March 16th, 2012 Book Reviews

When All That’s Left of Me Is Love: A Daughter’s Story of Letting Go

When All That’s Left of Me Is Love: A Daughter’s Story of Letting Go 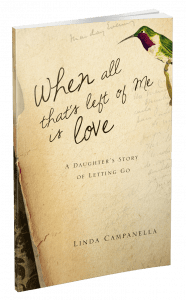 Linda Campanella calls herself an “accidental author.” No doubt this is because her book would never have been written had her mother, Nancy Sachsse, not died a year and a day after being diagnosed with terminal cancer, and Campanella not felt a deep need to come to terms with the pain of her loss. She wrote the book as a tribute to her mother and a gift to her father. The rest of the world is better off for the fact that she has chosen to share it with us.

In “When All That’s Left of Me is Love,” Campanella effectively uses personal narrative, copies of family letters and emails and many poems, especially works collected in Good Poems, an anthology of poems from Garrison Keillor’s public radio show, The Writer’s Almanac. With this, she shares herstory of her family’s determination to live fully and enjoy life for as long as possible, while simultaneously anticipating her mother’s death.

According to Campanella, the story originally wrote itself in her mind during the sleepless days and weeks that followed her mother’s death, and she felt compelled to write it down.

Whilethe reader knows that it will have an inevitable sad ending, it is nevertheless a heartwarming memoir filled with insights and inspirations that will comfort and console anyone who suddenly finds herself confronting the inevitability and imminence of death.

I would characterize the book as an uplifting portrait of living, loving, believing, and letting go. It is clearly a book that ought to be read by anyone who is in the process of losing a family member – as well as by anyone who will do so in the future.

In short, it is a celebration of the special bond between mothers and daughters, a love story on multiple levels, a spiritual journey, and lesson in the healing power of poetry. Besides that, it presents a good case for daily celebrating life through an end of day happy hour.

According to Campanella, the book essentially wrote itself in the weeks of intense Grief following her mother’s death in September 2009. She says, “Chapters poured out of me at all hours of the day and night, flowing directly from a broken heart to a blank page. I finished the manuscript by mid-December, in time to give it to my father for Christmas, his first without his wife and sweetheart of 52 years. It is a story I never wanted or expected to tell, but now that it’s written, I am happy to keep my mother’s legacy of love and her joyful, generous spirit alive through its pages.”

This is Campanella’s first book. A management consultant, married and the mother of three sons, she is a graduate of the first co-ed class of Amherst College and earned a master’s from the Georgetown University School of Foreign Service. When not writing, she runs a management consultancy serving non-profit organizations. Prior to starting her own firm, she worked as an international trade negotiator in the executive branch of the US government, a corporate executive in the aerospace industry and a senior administrator at a private college. She lives in West Hartford, Connecticut, with her husband and high school sweetheart, Joe, and a mini-goldendoodle.