Strigberger’s Latest Book ‘Boomers, Zoomers and Other Oomers’ Will Have You Laughing Over the Dread “A Word:” Aging

Title: Boomers, Zoomers, and Other Oomers: A Boomer-biased Irreverent Perspective on Aging
Author: Marcel Strigberger
ISBN-10#:0995950121
Reviewed for the NABBW by Anne Holmes 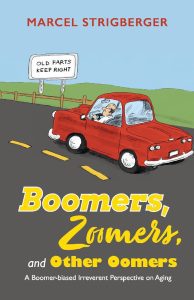 Canadian author Marcel Strigberger says he is a humorist trapped inside the body of a former litigation lawyer. You might think that is a unique resume starter, and you’d be correct. I’m pretty sure I don’t know of any other retired attorneys who can say that they have also worked as a stand-up comedian, sharing the stage with big-name humorists like Howie Mandel, Bob Saget and Jim Carrey.
Although (sidebar here) my sister’s godfather, a retired judge from sparsely populated northern Wisconsin, used to entertain family and friends with memorable humorous comments during times when he was not sitting on the bench. I’ve never forgotten a quip he made about himself when I was about ten. He said,  “I’m the best darn judge in the county. (‘Course, I’m the ONLY judge in the county)…” Maybe former attorney Strigberger would suggest my favorite judge should have also tried taking a turn at a comedy club!
The book is a witty, lighthearted look at life as a Boomer (in Canada, as a Zoomer) in eleven topical chapters, including health, Retirement, fear of aging, death and taxes. Beginning with a memorable quote from Charles Dickens’ A Tale of Two Cities —  “It was the best of times, it was the worst of times…” and closing with a reference to Shakespeare’s seven stages of man, Strigberger keeps the comment and the entertaining stories flowing, making the book a lot like reading an excellent stand-up comedian’s script.

I totally identified with the book and enjoyed reading it. You’ll probably identify with a lot of his witty and insightful stories. For me, he was spot on with the bit about visiting Costco and coming away with hearing aids. Though my most problematical retailer is Target.
I absolutely love that store, but I had to ban myself from it about thirty years ago, after realizing that I was physically incapable of walking in to buy a simple bottle of aspirin without walking away after having spent at least a hundred dollars on ‘must haves’ I hadn’t previously been aware of — like a pretty, blue 13×9 Pyrex casserole dish, a new set of placemats with matching napkins — or three, cute outfits for my daughter!
Strigberger is also the author of Birth, Death and Other Trivialities: A Humorous Philosophical Look at the Human Condition and Poutine on the Orient Express: An Irreverent Look at Travel. 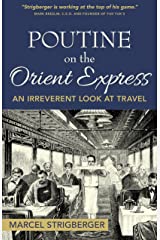