Marriage Can Be Murder: Every Wife Has a Story

Marriage Can Be Murder: Every Wife Has a Story 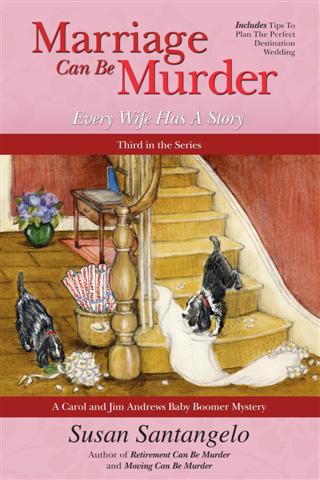 This time we learn that Carol is thrilled when daughter Jenny announces her engagement to Mark. After all, like almost every Boomer mother, she’s been dreaming of being the MOB (mother of the bride) at Jenny’s wedding since Jenny was born. And both Carol and Jim think Mark is a perfect match for Jenny.

She’s also delighted at Carol’s suggestion that brother Mike and his bride Marlee join them – making it a double wedding. Yes, Mike and Marlee are already married, but they eloped – so Jim and Carol didn’t get to be there.

Since it’s a destination wedding and time is short, Jenny wants to hire Tiffani Blake, a professional wedding planner who claims she’ll be able to pull this off, because she specializes in Cape Cod celebrations.

Tiffani, the owner of Cinderella Weddings, may be extremely capable, but Carol’s not too hot on her. Not just because she feels muscled out of her MOB role, but also because she soon realizes she’s the same Tiffani who’s having an affair with Bob Green, the husband of Carol’s best friend, Nancy.

The fun really gets going when Carol and Jim join Jenny and Mark in Nantucket to scout out wedding sites. They’re all booked at the Grey Gull Inn, which appears to be the number one choice for venue until Carol makes a midnight trip to the hallway bathroom and finds Tiffani’s body at the bottom of the staircase.

Worse yet, Bob Green’s also in town, and soon becomes the prime suspect in her death.There are plenty of other surprises in this book – like, did the murderer accidentally kill the wrong person?

As with all Santangelo’s books you’ll thoroughly enjoy this one, especially since all the usual characters – Carol, husband Jim, the dogs Lucy and Ethel, best friend Nancy Green, and Carol and Jim’s magnificent house – continue to be part of the story.