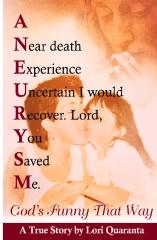 A portion of the proceeds from this book go to the Brain Aneurysm Foundation which, in and of itself, is an extremely good reason to purchase it. Lori Quaranta’s harrowing experience is detailed in God’s Funny That Way and is a tribute to the spirit of survival, the grace of God, the loving support of friends, and the wonders of modern medicine. Ruptured brain aneurysms claim 90% of their victims so it is no small miracle that Quaranta survived. She moves the reader from the moments just before the rupture to years later when she is given the final release from her doctors, and as she does so the reader cannot help but be struck by how many times she beat the odds.

Quaranta relied on the accounts by doctors, nurses, friends and family of the periods in which she spent time unconscious or had lapses in memory so she could chronicle her experience as accurately as possible. It becomes apparent that the energy and dedication of each individual involved with her case were crucial to her becoming stronger every day that passed, allowing her to clear obstacle after obstacle with a fighting spirit and a fierce determination.