Curse of the Coloring Book: A Novel Inspired by a True Story

Title: Curse of the Coloring Book: A Novel Inspired by a True Story
Available in paperback
Author: Howard L. Hibbard
Reviewed for the NABBW by: Anne L. Holmes 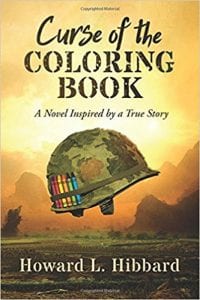 Anyone who came of age during the era of the Vietnam War will resonate with this book. Curse of the Coloring Book tells the story of Herald Lloyd who, in the Fall of 1967 recklessly quits college to join the Army.  Once signed up, he mocks the war and his decision to sign up, with the purchase of a GI Joe Coloring Book and half-gallon of whiskey. Then, with his induction papers in his pocket, and along with a set of crayons stolen from a Denny’s restaurant, he heads home to his SAE frat house, for a drunken send-off with his collegiate brothers and their girlfriends.
Though we may have pushed the memories down into the deep recesses of our brains, most of us Baby Boomers recall what it was like on college campuses across the country during these days.
As I grew up in Madison, Wisconsin, home of the University of Wisconsin-Madison, where anti-war sentiments were high – and yet there was also an active ROTC program – reading this book brought back a lot of memories, both good and bad. On my campus, the late 60s brought antiwar protests so violent the Governor called out the National Guard. University of California Berkeley was just as violent, as were many other campuses across the country.
Of course, Vietnam hurls Herald into a world he never anticipated, and he grows up fast. Amazingly — but yet not unlike the characters in the Robert Altman directed movie and later smash hit TV show M.A.S.H — he becomes a decorated combat platoon leader, commanding stressed oddballs and misfits like Dogman, who walks point and only barks to communicate.
For Herald, the worst of the war comes after he’s mustered out, when he begins suffering from debilitating PTSD. As all of us recall, there were no parades for returning Vietnam vets, and very little help with reassimilation back into a non-war society. This book very effectively describes the very human experience of surviving a year in the war, then returning home and trying to hide your experiences deep inside some internal box, so that they don’t destroy the rest of your life.
In Herald’s case, as with most vets, he’s not able to keep the emotions totally under control, and as he moves forward in life, with marriage and a joint law practice with his wife, the traumatic experiences recur. Always at times of stress and when he feels less in control of his life.
As you read the book, it helps to know that it is heavily inspired by the author’s personal experiences. Author Howard L. Hibbard quit college in 1967 to volunteer for the Army during the escalation of the Vietnam War. He rose through the ranks, and was discharged at age twenty-two. By then he was a paratrooper, a first lieutenant combat platoon leader, and briefly a company commander.
Among the medals he received were two Bronze Stars, one W/V Device for heroism in ground combat, one Oak Leaf Cluster, and an Army Commendation Medal. After the Army, he graduated from college and law school, and practiced as an attorney for thirty-four years. Curse of the Coloring Book is based on his combat and legal experiences, along with his Post-Traumatic Stress Disorder.

As Hubbard says in his blog:

Influences that inspired my writing of the story include the film, The Man in the Gray Flannel Suit, with Gregory Peck playing a World War II veteran, trying to balance the demands of a new job with family life, while dealing with the aftereffects of his war service, and the comicalness of the book/film Catch 22. My ‘catch,’ is that Herald, the protagonist, at times misplaces the blame on everything going wrong on the GI Joe Coloring Book, yet other times invokes the magical coloring book to protect him from danger. Humor lubricates this story, expanding the reader’s ability to empathize with the emotional finality of the legal and combat sequences. Whether it’s the platoon members’ imaginary Marlin deep-sea fishing inside a Vietnam War firebase-barbed-wire-ocean; a drunk lieutenant buddy falling out of a Moving jeep; or a tavern exhibition of a bar-parachute landing fall gone awry—humor creates the lightness to allow the reader to understand the day-to-day life of a combat soldier on the battlefield in a foreign land, and life when he comes home.

It’s my hope that people connect with this story, to help them find their own courage and humor, face their demons with dignity, and empathize with other’s trauma, like that of a combat veteran living with post-traumatic stress disorder, (PTSD).

Several retired military officers who have reviewed the book offer high praise for its realism. And, thankfully the book is not all “sturm und drang,” there’s a lot of humor as well. I’d say anyone who lived through the 60s and 70s – whether or not you were a part of the military experience, will both enjoy and benefit from reading this book.