Confessions of a Not-So-Good Catholic Girl 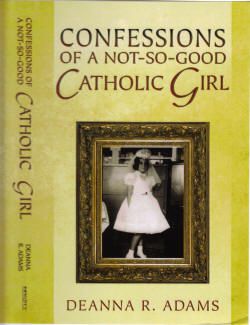 Author Deanna Adams takes a stroll down memory lane and relives her days spent growing up in a catholic household in the Midwest. Although those strolls are, at times, somewhat lengthy, they are entertaining. Her delivery is candid, forthright, and amusing. There are chapters that have a certain appeal, like the one that focuses on Adams’ days working in a biker bar; this experience alone had the makings of a good book.

The snapshots preceding each chapter give the reader faces to put with names, and that is quite nice, and offers another avenue for bonding with those Adams has featured in the book.

Adams perspective is no-nonsense; she shoots straight from the hip with a voice that conveys a direct and open-minded attitude. Confessions of a Not-So-Good Catholic Girl is the portrayal of a young woman’s catholic upbringing—a childhood in which she often felt caught between two desires: to heed the teachings and push the limits.