Portugal’s gorgeous Algarve region offers a variety of things to do and see with charming towns, beautiful beaches, rocky coastline, and historic sites. It is the southernmost region of Portugal with about a half-million inhabitants, but it triples during the vacation season with seasonal residents.

Our two-day visit in early March was somewhat marred by rain, but when the sun was out, the weather was delightful and places were inviting. We stayed two nights in Portimão, a modern and picturesque ocean-side town that has become a hub for tourism in the area because of its proximity to many places. Our guide informed us that British music legend Cliff Richard once lived in the Algarve while looking after his wine production business. She reminded a few in the group about him by playing “We Don’t Talk Anymore” more than a few times the remainder of the trip!

It was raining off and on and a blustery wind pushed you along the way when we ventured to the Cabo San Vicente Light House and Sagres Fort. Certainly not an ideal time to take photographs. Aside from that, it was another place to soak in the scenery, if you know what I mean. And when you’re making what will probably be a once-in-a-lifetime visit, you make the most of the situation, regardless of circumstances.

Something I found fascinating was a circular pattern inside Sagres Fort,  believed to be a wind compass. It was discovered in the 18th century and excavated in 1919. That’s the Atlantic Ocean past the walls.

Because of the inclement weather, we had to postpone a boat ride from quaint Lagos along the rocky coast until the second day of the trip. There were no complaints from my fellow travelers.

A bumpy and splashy boat ride along the rugged coast ranked as one of the highlights of the tour, perhaps because it has an amusement element for the adventurous side in a few of the travelers. 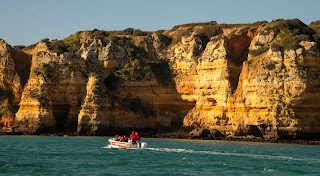 The last stop during our stay in the Algarve was the historic town of Lagos. It’s a friendly, interesting place where a person can take in maritime history, sit back and relax on a street bench, enjoy a delicious meal in one of the many restaurants, or simply take a lazy stroll along the quiet streets.

The next stop will be Lisbon. Come along for the ride (Hint: hit the Follow button in the right column)!