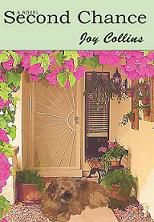 Second Chance is a story about Sara Weber, a woman whose relatively quiet existence becomes increasingly complicated as her husband’s ex-wife barges into their day-to-day lives. Sara’s predicament serves as a reminder that life can…and will, shove circumstances in our wake over and over until we finally understand. She wrestles with anger, jealously, and fear as seemingly all of her relationships—her mother, sister, step-daughter, and husband—are tested simultaneously. It’s a lot to swallow and, at one point, Sara believes all may crumble into heaps of unmanageable ruins. However, persevere she does after crossing paths with a teacher of forgiveness.

In the beginning of the story, my feelings to walk through the difficulties by Sara’s20side were slow in warming, even hesitant, as she seemed somewhat self-centered. However, as I moved through the story, I developed a clear appreciation for Sara’s tremulous circumstances, and the seemingly impossible task of removing herself from the shadows of the ex-wife, Mona.

Collins’ creation, steeped in the premise, “what goes around comes around,” offers a nice read and she definitely shows promise in the crafting of worthwhile storylines.