The world of content creators is deep and wide. There exists literally at least one creator for almost every interest or niche out there. Part of what I love about being an influence marketing strategist is discovering new, interesting, creative people who connect with audiences in fun ways. If they make sense to work with a client I’m helping, I get super excited.

In addition to the diversity of topics the world of content creation offers is the diversity of business models, sizes and scopes of a creator’s per view. What I mean by that is some creators focus on one channel or another and do the occasional brand deal to monetize their content there. That’s the standard expectation for an influencer I think.

Still others see their content creation as a business, not a hobby with an income. They may see each of their channels as a revenue stream and optimize their content and sales acumen accordingly.

Take that a step further and a content creator has the mind of a publisher. They’re a media channel and reach audiences in multiple ways. They have blogs and social networks for publishing written content. They have those social networks and YouTube to run their own television network. They have podcasts to have a radio network and so on.

Michiel Perry is one such creator. It’s no surprise she sees her Black Southern Belle channels as a media empire of sorts. She spent several years in the “real world” as a public policy communications professional. She worked for the U.S. State Department and Google, among other places. So she came into this content creator world knowing a thing or two about the business.

I wanted to talk to Michiel for a couple of reasons. I knew she was a successful content creator, but one who had expanded beyond that label to running a media company in the social-first world we live in. She’s also unique in that her social channels are very much about the community around Black Southern Bell, not just her perspective.

That’s old school social media. And I like it.

But, as I’m also want to do, I saw an opportunity to talk to her about race and its impact on her world that maybe we who don’t live in the world of the disenfranchised understand.

This episode of Winfluence is presented by Tagger, a complete influence marketing software solution. Check them out for a demo today at jason.online/tagger. 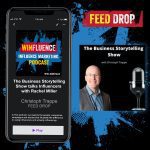 You regular listeners are probably wondering what’s up with an episode drop on a Thursday. We’ve gotten into a nice weekly rhythm here on Winfluence. But today, I have a treat for you. We’re...

September 12, 2022
Exploring the Nuances of Global and Luxury Marketing with Influencers

The primary reason I like to interview people about this wild, wonderful world we work in is that I know I don’t know everything. Even though we talk about a lot of the topics that I consider... 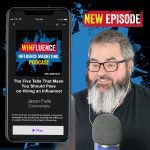 September 5, 2022
The Five Tells That Mean You Should Pass on Hiring an Influencer

Does the name Sam Farha mean anything to you? If it does, you’re probably a fan of poker. Farha is a rather famous professional poker player. He is most know, however, for a hand he lost.In 2003...