I have been a student of stand-up comedy from my earliest memories. I would stay up late when I was little to watch The Tonight Show with Johnny Carson just to see the monologue, then hope beyond all hope one of the acts that night was a comedian. Later, I fell in love with David Letterman, who had more comedians and introduced me to a broader love of the craft.

I bought cassette tapes of Dennis Miller, Bobcat Goldthwait and more. And, of course, anyone who grew up in the 1980s and loved stand-up comedy, had Eddie Murphy’s Delirious and Raw memorized.

I love stand-up. And stand-up comedians. So I was quite aware of the plight of them during the pandemic. Clubs couldn’t open safely. Many closed for good. And the comedians themselves? They had to turn to alternative ways to earn a living.

One of those comedians used the challenge of the pandemic to turn his colleagues from the club circuit into content creators for brands. Richie Redding spent 19 years as a club comedian. The last 13 of those that was his full-time job. When he reached the point of pandemic panic, not knowing how he was going to pay the bills, he got a call from an ad agency that needed a funny video.

The ask to be a content creator lit a fire under him and Redding started a comedy consulting firm. Funnier Than You Are offers brands the opportunity to tap into professional comedians for comedy content. Redding forms a writer’s room and matches the writer friends with the brand’s target audience. The content they’re producing is making a dent, helping brands churn out far better content than they would otherwise, even from their agencies … and I’m an agency guy!

But beyond that, Redding is expanding the concept to help build individual influence and influencer status for his roster of comedy writer’s too. 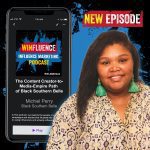 The world of content creators is deep and wide. There exists literally at least one creator for almost every interest or niche out there. Part of what I love about being an influence marketing...