GUEST: Lieutenant Colonel Ingraham (Ret.) spent 24 years in the United States Marine Corps and served in Special Operations with deployments including Afghanistan, East Timor and Kuwait. He attended the Naval War College where he received his Master of Arts with distinction in National Security and Strategic Studies. He now writes as well as heading the training company Golden Compass. He and Eric discuss Ukraine, Russia and what might be going through Putin’s brain as well as tactics, deployment and returning to civilian life as a veteran.

Plus in the News:

Viking Dog is helping raise funds for Veterans and you can help! Visit TheVikingDogStore.com and for every Never Doubt Your Power shirt we sell we will make a donation to The Veteran’s Project, including new special military designs! Plus Viking Dog is raising money for ocean conservation and wolves! Visit now and help us change the world!

Now available! THE #1 BESTSELLER! How To Start A Podcast In Less Than A Day! Get your copy here! 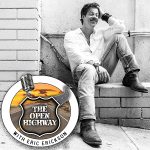 GUEST: David D'Orazi is the author of The In-Between Artist. The book is about his father Tony D'Orazi who was one of the top artists at Disney, a television and radio host and  who suffered from...

November 2, 2022
80- Joe Gulesserian: Writer, Entrepreneur and Financial Expert- What Might The Future Hold?

GUEST- Writer, entrepreneur and financial expert Joe Gulesserian is the author and creator of The Practical MBA on Economics. He joins us to talk economics, inflation and what the financial future...

The Open Highway is a long-form interview podcast hosted by Eric Paul Erickson. Bringing the discovery of the open road into the discourse of modern conversation. Much like the old days when we would sit down at a roadside diner and share a cup of coffee with a fellow traveler, The Open Highway brings conversation back to the world and allows us to learn about interesting topics and people.

Host Eric Paul Erickson is a former journalist with the Chicago Tribune‘s City News Bureau, the Roswell Daily Record and other newspapers and media outlets as well as an award-winning writer, performer and filmmaker.