This week is a rebroadcast of one of my favorite episodes from 2019. I am speaking with Forbes Publisher Rich Karlgaard, the author of Late Bloomers: The Power of Patience in a World Obsessed with Early Achievement.

I am releasing this episode the week of the US Thanksgiving holiday. Rather than not publishing an episode, I thought I would dig back into the archives and rebroadcast one of the most impactful episode of 2019. If you listened to this episode 3 years ago, I suggest you listen to it again.

Rich Karlgaard published Late Bloomers: The Power of Patience in a World Obsessed with Early Achievement. There is so much good stuff in here about how society worships early achievers yet many of us are late bloomers. We do not find ourselves until later in life but we spend many of our earlier years preparing to become the success we find later in life.

You can read his bio:

Rich Karlgaard is the publisher of Forbes magazine and the author of LATE BLOOMERS: The Power of Patience in a World Obsessed with Early Achievement. He is also a lecturer, pilot, and the author of four acclaimed previous books. A self-proclaimed late bloomer, Rich had a mediocre academic career at Stanford (which he got into by a fluke), and after graduating, worked as a dishwasher, night watchman, and typing temp before finally finding the inner motivation and drive that ultimately led him to his current career trajectory.

This episode is sponsored by Career Pivot. Check out the Career Pivot Community, and be sure to pick up my latest book, Repurpose Your Career: A Practical Guide for the 2nd Half of Life Third Edition.

For the full show notes and resources mentioned in the episode click here. 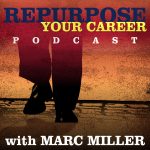 November 14, 2022
Is the Pandemic Over?A Look at our Divided World with WaPo Editor Marc Fisher #296

Description: In this episode, I am speaking with Marc Fisher a Senior Editor from the Washington Post. Marc wrote a fascinating article called Is the pandemic over? Pre-covid activities Americans...

November 7, 2022
Empathy at Work – Understanding Generation Z and the New World of Work #295

Description: In this episode, I am speaking with Sophie Wade who is the author of Empathy Works: The Key to Competitive Advantage in the New Era of Work. We are going to talk about the newest...

October 31, 2022
Recruiting Interim Talent for a Multitude of Industries with Susan Molke #294

Description: In this episode, I am speaking with Susan Molke, National Recruiting Director in the Interim Resources Division at StevenDouglas. I met Susan at an Encore Palm Beach County virtual...