Noel Asmar: Make Your Life Interesting. It's Your Journey.

“We over-complicate things,” Noel Asmar of Noel Asmar Group of Companies says with a genuine smile during our conversation, “and it’s sometimes… just have some respect for people.” We were discussing her eponymously named design and clothing company leading the charge in creating work uniforms for non-binary people working in the spa industry. Something quite extraordinary in the hospitality business, given that the industry is admittedly disinclined to taking controversial stances or eagerly tackling tough societal issues.

But as we went deeper into Noel’s story, it became evident that her commonsense brand of fearlessness and straightforwardness has always been present, adheres to no overt political philosophies and is anchored in respect for all people. Like when she picked up her life at 20 years of age and moved from Canada to Beirut to open a 5 Star hotel. It was here she made her first foray into the clothing business when she designed the uniforms for the hotel’s housekeeping team. She was only supposed to be in Lebanon for one year but stayed for 10, drawn to the city by its culture, its melting pot of people and its food. Like being evacuated on a Huber craft out of Lebanon to Cypress during the war in the 1990s. Like starting her design and Fashion company by just fearlessly, getting it done – no over-complicated explanations, only grit and hustle. A company which would subsequently design the uniforms for the Canadian Olympic Equestrian team in 2016.

Her perspective and approach are both bombast-free. Her take on business success and life success is intermingled with the guiding principle of authenticity. A word that is used often today, but in Noel’s worldview she ties that authenticity to one’s ability to drown out the chatter of the world so you can hear your own voice and then do that thing which is calling to you.

Above all she believes in a respect and dignity for humanity that she learned from her global travels and brushing up against the humble and the high. She says in her sincere manner, “How can you not respect people for their beliefs… Cultural exposure gives you a different lens. More tolerant. Sit back and realize you’re not the only one with a view in the room. This is important in every room. Everybody has a view… Respecting somebody’s view is important, as you wish to be respected yourself.” 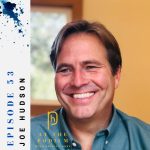 January 17, 2023
Joe Hudson: Build Authentic Connections with Yourself and Others.

What Are You Really Looking For?Joe Hudson has lived the life of a modern-day Jack Kerouac, embracing a spontaneous life and ethos that mirrors the improvisational intricacies of Thelonious Monk.... 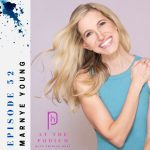 A Golden Voice“The ineffable gift that is gold” is how a colleague and critic once described Marnye Young’s voice and talent behind the microphone. High praise for Marnye who has grown her own...

January 3, 2023
Marsha-Ann Donaldson-Brown: What Do You Have to Let Go of to be Liberated?

Ghosts and Wedding Dresses.Miss Havisham is one of Charles Dickens most complex and unforgettable characters in all of literature. When we meet her in his novel Great Expectations, she has literally...

With over 20 years of experience in the global luxury hospitality and wellness industries, Patrick has built a dynamic career as an international leader within this elite field, running multimillion-dollar operations successfully by delivering the highest levels of performance and guest satisfaction.

Patrick has worked for such iconic brands as Four Seasons Hotels, Montage Resorts, Equinox and Sandals Resorts.Patrick serves as Chairman of the Board for the International Spa Association – the premier spa association with a presence in over 70 countries that fosters the development and professionalism of the global spa and wellness industries.

Patrick holds a Master of Fine Arts from Yale School of Drama in Acting and a Bachelor of Arts from Vanderbilt University in Creative/Nonfiction Writing, English Literature and Theatre.

He is also the Creator and Host of the podcast and video podcast “At the Podium with Patrick Huey” which has reached over 600,000 people since its inception in 2021. Available on Apple Podcasts, Spotify and YouTube, the show and its weekly newsletter focus on sharing the stories of people from a diverse background of lives, careers and experiences who have stepped boldly into saying “yes” to the unexpected and transformational detours of their lives.