Home » The Devil Went Down to Connecticut (Review: The Conjuring: The Devil Made Me Do It)

“The Conjuring: The Devil Made Me Do It” is streaming on HBO Max 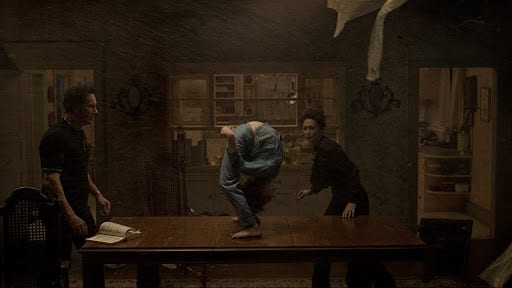 Much like life, franchises find a way. Sooner or later, they realize they can’t keep doing the same thing over and over, and they need to evolve. The Fast and the Furious began as a charmingly low rent ripoff of Point Break. With F9 being released a few weeks from now, we’ll see a series that took enormous chances and transformed into something entirely different.

We’ve arrived at a point, not unlike the late 1960s, where studios don’t fully know what audiences want and are scared to death about it. Back then, the studios allowed filmmakers to take insane chances since they couldn’t figure out what else to do. Now, though? The cinematic landscape is stalked by an apex predator — the MCU. Everyone else figures that there’s only one way to stave off financial and critical ruin, and it’s by creating a massive interconnected universe.

That brings us to the universe of The Conjuring and to Ed and Lorraine Warren. As a former resident of Connecticut, I was dimly aware of their exploits.* Were they truly professional demonologists who recognized the existence of spiritual evil, or were they con artists taking advantage of suffering families? Honestly? I have no idea what the truth really is.

What I do know is that the ghostly exploits of the Warrens have spawned a cinematic universe. 2013’s The Conjuring made money. A number of snooty critics like me liked it. That led to three movies about an evil doll, one movie about a child-stealing beastie, and now a trilogy concerning New England’s favorite ghostbusting Bible thumpers. The bad news is that the third installment, The Conjuring: The Devil Made Me Do It lacks both the heart and genuinely creative scares that brought the franchise to life. 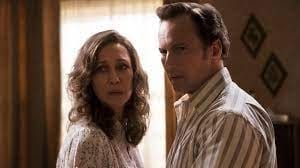 Things start off strong as we see the Warrens documenting an exorcism in the bucolic hamlet of Brookfield, Connecticut.** The Glatzel family is having a devil of a time with a demon, and eight-year-old David (Julian Hilliard) has been possessed by a fiendish thingy. How do we know the lad is possessed? He flails around, his eyes mysteriously change color, and in a genuinely unnerving moment, his body contorts in a way that bodies generally don’t.

The family is understandably freaked out, including David’s older sister Debbie (Sarah Catherine Hook). Debbie’s boyfriend Arne (Ruairi O’Connor) thinks he sees a solution and, in a classic rookie move, he invites the demon to take him instead. The demon takes Arne up on his offer and leaps into his body. Ed Warren (Patrick Wilson) is also understandably freaked out and proceeds to have a massive heart attack. Lorraine Warren (Vera Farmiga) whisks Ed to the hospital, where he lapses into a month-long coma.

Once Ed emerges from his coma, the Warrens warn the Glatzels that the exorcism didn’t work and some sort of awful tragedy will befall them. Turns out they weren’t exaggerating, as Arne begins seeing things and hearing things. It all boils over when Arne seemingly snaps and stabs his landlord Bruno Sauls (Ronnie Gene Blevins) to death.

Arne is swiftly arrested and a trial date is set. His lawyer figures he’s screwed, but the Warrens offer a novel suggestion for a defense — not guilty by reason of demonic possession. Ed and Lorraine try to get to the bottom of things and get mixed up with the case of a missing girl, demonic totems left all higgeldy-piggeldy, and an extremely unfriendly Occultist (Eugenie Bondurant) who’s up to some seriously Satanic shenanigans. 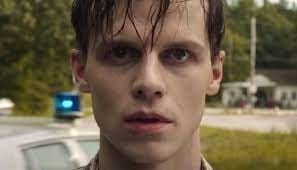 There’s nothing wrong with a boogedy-boogedy boo movie. I am, naturally, referring to a kind of horror movie in which something suddenly looms behind the main character, a VERY LOUD NOISE happens, or something leaps into the frame, startling everyone.*** Like slapstick comedy, these kinds of horror movies depend on perfect timing. Done right, it can scare the hell out of you. Done too often, however, and it becomes dopey.

The first 15-20 minutes of The Conjuring: The Devil Made Me Do It works very nicely. We have a creepy exorcism, a young man going over the edge, and the promise of a boogedy-boogedy boo movie mashed together with a courtroom thriller. I had thought initially that director Michael Chaves was pushing the series in an interesting new direction. Instead, we got a watered-down version of the previous two films. While there are lots of jump scares and two moments cribbed from The Exorcist and Zodiac, there’s much less heart. One of the secrets to the success of The Conjuring is that you have enormously likable people up against the forces of darkness, and the film takes the time to let us hang out with the Warrens and the original Perron family. Here, The Devil Made Me Do It is so interested in freaking us out, it forgets to care about the people being freaked out.

The screenplay by David Leslie Johnson-McGoldrick doesn’t do anyone any favors for a couple of big reasons. First, he sets up the involvement of the Warrens with the trial of Arne Johnson, then does nothing with it until literally the last few minutes of the film. Johnson’s case was a real one in which the Judge immediately rejected the defense and the Warrens were lambasted for being publicity hounds. I’m not saying we needed a setpiece where ghosts attack the court like in Ghostbusters II. I am saying that if you’re going to set up a collision between the supernatural and the law, you should pay it off. Instead, we’re dropped into a Satanic conspiracy that literally makes no sense. Why are the Glatzels targeted in the first place? Because Satanists are Satanic or something? Why does the evil Occultist become ensnared by the Dark Arts? Because reasons, silly! Additionally, there is less of a focus on the Warrens as people here. Remember the charmingly dorky scene in The Conjuring 2 where Ed impersonates Elvis? Not much of that is here, and the Warrens are reduced to either parroting exposition or exclamations like, “Fight it, Ed!” and “Lorraine, that’s enough!” Did this muddled script happen due to studio meddling? Did the filmmakers decide to change course midway through and hoped nobody would notice? I don’t know. It simply doesn’t work.

It’s not all bad, because we’ve got some strong performances to see us through. I’d argue the primary reason for the success of The Conjuring films is the strong chemistry between Vera Farmiga and Patrick Wilson. As I’ve said in the past, these two are one of the platonic ideals of what a married couple should be like in movies. Not only do they love each other, they actually like each other. Plus, they’re the rare movie characters who are devout Christians that actually behave the way a Christian should. What a concept! Ruairi O’Connor does nice work as the, unfortunately, possessed Arne. While he spends plenty of time twitching and sweating, he remembers to also play Arne as a normal and likable guy.

The universe of The Conjuring: The Devil Made Me Do It is, in its way, a juggernaut not dissimilar to the MCU. Both understand the need for change to placate fickle audiences. This film could have gone in a new and innovative direction, and while it’s not all bad, there’s definitely a huge missed opportunity. After all, this series more than any other ought to know that the devil’s in the details.

*You used to be able to tour the Warrens’ home and view all manner of demonic tchotchkes, such as the inspiration for the evil doll Annabelle. I never did, because I have better things to do than tempt the forces of darkness. You can learn more about it here.

**I yearn for a short about the Warrens where they investigate a haunting and inform the terrified homeowners that the problem is something banal. “Sorry Mr. and Mrs. Smith, there are no ghosts. You just have rats in the walls. I wish we could help, but rats give us the willies.”

***My good friend Keith also refers to these as “cat jump movies.” You know the ones, where someone is in a dark area, is startled and discovers that the source of the noise “is just a cat.”

The post The Devil Went Down to Connecticut (Review: The Conjuring: The Devil Made Me Do It) first appeared on OnJournalists.

Boss Level is streaming on Hulu In the world of Hollywood, it can take time for a genre to emerge. That’s mostly due to the… 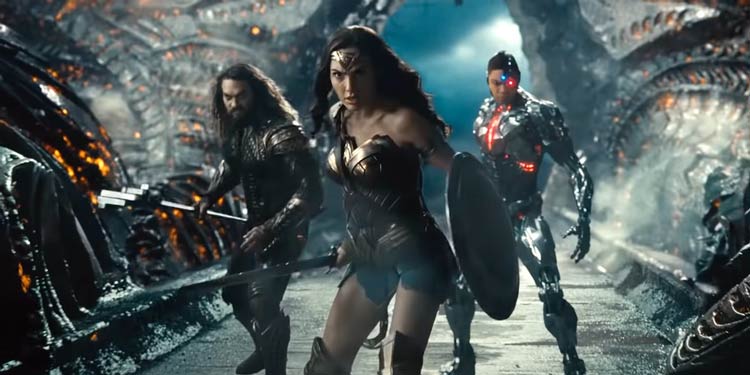 Zack Snyder’s Justice League is streaming on HBO Max Second chances don’t come around too often. That’s just as true in the movie business as… 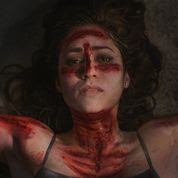 I’m a genre nerd. While a thoughtful documentary or smart drama will capture my attention, nothing gets my nerd radar pinging faster than a film… 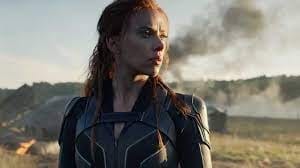 Black Widow is streaming on Disney+ Prequels are terrible. That is, until they aren’t. It used to be that the idea of checking out the… 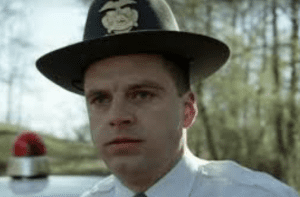 The Devil All the Time is streaming on Netflix I’ve been to the South, but I’ve never been to The South. To clarify, years ago…

Please confirm you want to block this member.

You will no longer be able to:

Please note: This action will also remove this member from your connections and send a report to the site admin. Please allow a few minutes for this process to complete.

You have already reported this