Home › NABBW › Linda Ballou Shares Why Winter Is A Perfect Time to Enjoy a “Wild Time” on the Central Coast of California
December 16th, 2021 NABBW

Winter on the Central Coasts means fewer tourists and plentiful wildlife. Birds and marine mammals gather there in chaotic profusion from December to February. 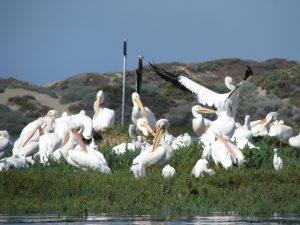 Every year, hundreds of birders flock to the sleepy fishing town of Morro Bay on California’s Central Coast to take part in the Audubon Birding Fest. The Pacific’s saltwater mixed with the freshwater of streams flowing in the largest estuary on the west coast resulting in a nutrient-rich brew for thousands of birds. The charm of the rust-colored, reed-choked estuary is subtle, but upon closer inspection, you will find its beauty undeniable.

During the birding fest that takes place on Martin Luther King weekend, there are 140 different activities to match every level of enthusiasm. Be you a wild-eyed birder frantically checking off your life list, or a casual nature lover who just likes to add another dimension to their walks, there are activities for you. 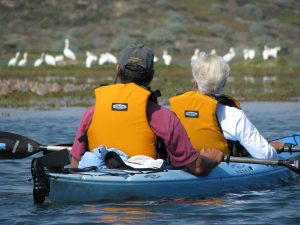 Friends Pat and Jim with the pelicans

On “The Big Day,” birders are ferried around to birding hotspots in the region and often garner as many as 100 species to their lists. In the “Little Sit,” those who don’t hike can enjoy the covered 4th Street Audubon Lookout overlooking the estuary for a couple of hours and observe whoever appears on the scene during that time. Over 50 species can be spotted with this very comfortable option. A list of birding hotspots and activities during the fest are on the Audubon website.

The absolute best way to see animals and birds up close without disturbing them is in a soundless kayak. For those who can’t slip into a kayak, electric boats in the main harbor are available. If you only have one day to explore the estuary, do it with Virginia or John Flaherty of Central Coast Outdoors. They have an encyclopedic knowledge of the birds and marine life and love to share information with guests on their tours. They also offer hiking and biking tours. 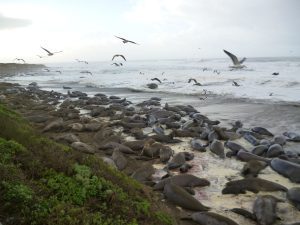 At the Elephant Seal rookery 3-miles north of Hearst Castle on Hwy 1, immense waves crash against the black volcanic rock on this wild stretch of beach.  An ear-piercing pandemonium had set in the day I arrived in late January. Each year from Dec. to February thousands of elephant seals haul onshore to birth their young.

Friends of the Elephant Seals have built a boardwalk that allows viewing of the blubbery matrons and their helpless offspring. A King tide was thundering onto the shore, taking out the beach and stressing the females. Their babies cannot yet swim. It takes them six weeks to gather enough strength and bulk to enter the sea and fend for themselves. At that point, their mothers, having lost thousands of pounds in the process of bringing them into the world, return to the ocean depths to feed. They will return in the summer to molt and rest up for the next round.

If you want to see these behemoths playing in tide pools, go to the parking lot about 100 yards north of the main event and take a stroll on the bluffs. This pleasant meander through grasslands is part of the California Coastal Trail. 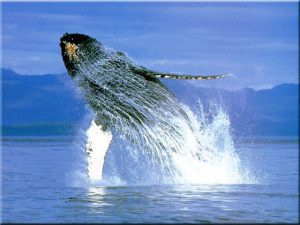 Each winter whales make the longest migrations of any mammal on earth from the chill waters of Alaska to Baja California. They rely on ancient knowledge to guide through treacherous seas. Today their challenges are greater than ever —  from congested, noisy shipping lanes, to pollutants and plastic in our oceans. The creation of the Whale Trail with over sixty designated viewing sites on the Pacific Coast is an attempt to bring greater sensitivity to the needs of the largest, and oldest creatures on our planet to survive.

Six viewing sites have been identified on the Central Coast of California;

At each site,  placards display what types of marine mammals people should expect to see from that vantage point and signs that will help you spot whale spouts. 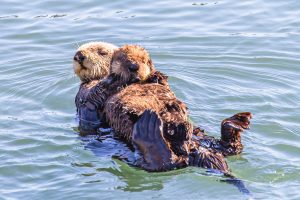 One of my favorite stops is at the T Pier on the East end of the Embarcadero in Morro Bay. There is an otter nursery there where Female otters can be seen floating with their newborn on their bellies. Nothing cuter than watching them crack open mussels and clams to stuff their whiskery faces. Nearby are numerous eateries overlooking the harbor where barking sea lions haul up for a snooze. 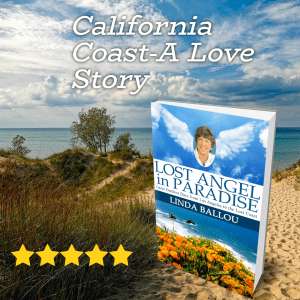 A road trip on the Central Coast during winter garners unforgettable sightings of bird and marine mammals. Suck in the tangy sea air and feel the charging energy of crashing waves on the many trails tracing the coastline preserved for all of us to enjoy. I have more tips for you in my book Lost Angel in Paradise, where I share 32 of my favorite daytrips from Malibu to Mendocino.

Linda Ballou is an adventure travel writer with a host of travel articles on her site www.LostAngelAdventures.com. You will also find information about her travel memoir, Lost Angel Walkabout-One Traveler’s Tales from Alaska to New Zealand, and Lost Angel in Paradise where she shares her  favorite  hikes and day trips on the coast of California.