Linda Ballou is Remembering Days in the “Bu” (Malibu, California) 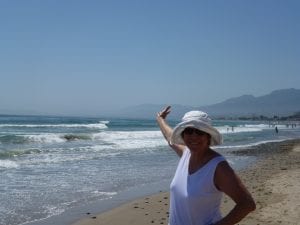 I hiked the half mile around Malibu Lagoon to what is famously known as Surf Riders Beach, aka “Buns Galore” Beach. Barefoot surfers joined me on the shade-less path carrying their boards tucked under their arm or over their heads. Unzipped wet suits, folded down on slim waists keep them half-way cool. These are real he-men if you ask me. I wear sneakers for the trek and carry supplies of water and fruit for when I get dry.

At the entrance to Malibu Lagoon State Park I was snagged by a couple of gay caballeros from Italy who wanted their picture taken by the park sign. Their English was sketchy, but with some animated sign language I got the drift.

The beach is lined with sparsely clad individuals from around the world. Pasty white Germans are a common sighting. Middle Eastern accents abound. Japanese women wearing big-brimmed hats and bandanas like the kind cowboys wear when herding cattle stroll the sands fully clothed. 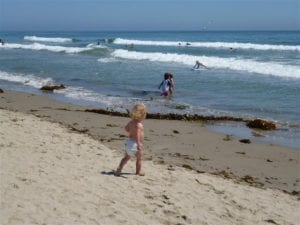 Children of all ethnic origins are delirious with joy from spending a day in the sea, no matter what language their parents speak. They squeal at the top of their little lungs and run in and out of the surf dragging diapers full of sand.

The local girls spread out on towels belly down wearing butt-floss bikinis that leave nothing to the imagination. They dare to bare themselves to an intense sun that crisps them like fritters on the sand. There are always co-eds taking cell phone pictures of one another practicing coquettish poses to share with their Instagram followers. 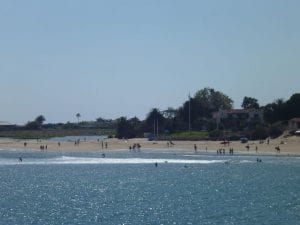 Surfers of all ages and genders fly in an out of the waves in their black body suits tempting the great white sharks rumored to be heading this way. I figure there are so many of them to be mistaken as seals—natural shark food—that they will have no interest in little ole me—the solo female in a purple rash-guard sporting three-foot fins.

I swim in the calmer waters by the Malibu pier. Swells there can be quite strong when the tropical storms come up from Baja sending ten-foot waves curling to shore with a thunderous crescendo. I have been caught out in the monster waves and escaped their crashing on my head.

Getting out of the water is difficult as the ocean sucks the pulsing water and everything and everyone in it back into its clutches. So far, I have been able to count the wave sets and survive. With lifeguards busy surveying all those bare bottoms, I don’t have much hope that anyone will run in to save me. 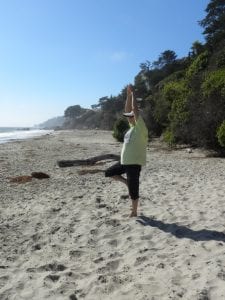 After my swim, I lay content under my umbrella, (hoping to avoid dying from melanoma) watching the surfers fight to get the perfect take-off spot. I envy them their grace and agility and marvel that some of them have survived long enough to collect social security. Once a surfer, always a surfer? Even the gray-hairs are wiry and fit. It’s a good way to die.

The biggest challenge on weekends is getting a place to park when the State parking lot is full. On those formidable days, I go down Malibu Canyon Road to my favorite less-traveled beach where locals hang out and bring their dogs. It is a finable offense, but since there is no one to call them out for this transgression all breeds are represented.

They frolic wildly tearing up and down the sand, sniffing freely of their fellows and generally having a hell of a good time. So far, it has not been a problem for me though I have had a few interlopers come to my marked-out territory on the sand to shake themselves vigorously sending spray my way. 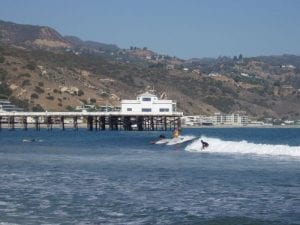 Another winter has passed. Spring has sprung and I am eager to air out my spirits with sunshine and a sea breeze. Can’t wait to join the throngs, to don my fins, take a dip, and feel the synapse snapping in my skull and tingling in my limbs.

Summer in the “Bu” is busy for good reason. The water is a deep aquamarine with white foaming white ribbons rolling along the shore. The sky overhead is cerulean blue smeared with creamy white clouds, so I am heading back today. Not sure what I’ll find, but it is always a heady way to while away an afternoon. 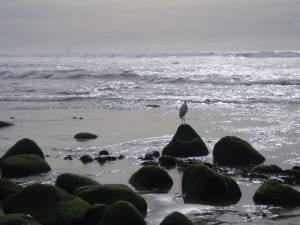 Linda Ballou is an adventure travel writer with a host of travel articles on her site, along with information about her travel memoir, Lost Angel Walkabout-One Traveler’s Tales; historical novel,Wai-nani, A Voice from Old Hawai’i; as well as her latest novel, The Cowgirl Jumped over the Moon. Find more information about Linda at: www.LindaBallouAuthor.com.