Social media allows young people to connect, express themselves, and share content. It has
created a new cultural paradigm that is driving technology and businesses and changing how
people communicate. Social media is a dual-edged sword. Social media has many positive
aspects but can also negatively impact young people.
Social media apps require users to be at least thirteen years old. In a recent survey, parents
revealed that 50% of 10-12-year-old children use social media apps, and 33% are 7-9 years old.
If your child is using social media or has been asking, you need to talk to them about social
media. What rules do you have? How does it not always reflect the truth of someone’s life?
Dr. Eshleman said that social media “makes it easy to compare yourself to another.” “Most
people only want what they want to see on social media. Social media allows us to access
infinite information whenever we need it, which can make it very difficult for kids.
Television was the first source of electronic media for children in the past. In the past, research
has revealed that there are two critical points to media use.
Now media is everywhere. It is right in your pocket or purse with your smart phone. Social
media, such as Facebook, Twitter, etc., are becoming increasingly interactive. Education
programming. Each of these options has unique risks and benefits.
 How often do you watch media? Screen Time refers to how long you spend viewing
media. Screen time is linked to poor sleep, obesity, behavioral problems, poor
school performance, and poor sleep. An old recommendation was to limit screen
time to less than 2hrs per day.
 What do you watch? Violent programs and games can cause children to become
more sensitive and encourage poor behavior. Some programs can promote alcohol,
drugs, or sex use and abuse.
 Social Media. Social media can promote learning, networking, and friendships when
used correctly. Face Time, Skype, and other social media can be used to help
children keep in touch with family and friends and create relationships. Social media
can sometimes get in the way when it’s introduced too early. It is crucial to help
children use the internet and social media safely. This is digital citizenship.
 Education games, programs, and apps. Programming encouraging creativity, music,
and art can be an excellent choice for teens and children. Media that encourage

family discussion about news events and the news can be beneficial. Kids will enjoy
content-appropriate games that encourage real-life turn-taking and social
interaction. It would help if you avoided programs that are too fast-paced and
violent for your children. They can cause problems in their development and health.

Why Limit Media Use?
Digital media overuse can put your children at high risk. 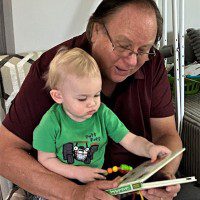 Gramps Jeffrey’s children’s book, “I Don’t Want to Turn 3”, explores what goes through a toddler’s mind that parents are so desperate to understand. It is based on the true experiences he has had with his 6 grandchildren that were born 2 each to his 3 Millennial daughters.

Gramps Jeffrey is the pen name for Marc Joseph whose first book “The Secrets of Retailing…How to Beat Wal-Mart” was written to help entrepreneurs and small businesses compete against the big guys. Arianna Huffington read his book and asked him to contribute to the Huffington Post. He has written over 100 articles about small businesses, education, the homeless and several other nonprofit topics dear to all of us.

Gramps and his lovely wife Cathy live in Scottsdale, Arizona where 2 of his grandchildren live. 2 more live in Austin, Texas and 2 in Orlando, Florida.